Graduate audiologist since 1997,
Natacha Chetritt-Bonneyrat welcomes you in a space
exclusively dedicated to hearing care
for a personalized assistance

The correction of an auditory deficiency reveals a multitude of aspects and parameters; acoustic, physiological, personal or professional.

Our ambition and our commitment are to respond with the right specification and with the same professional code of ethics to all of our clients’ requests thereby making each application of an auditory aid unique.

It is within this context of respect and professionalism that we dedicate ourselves on a daily basis defending the ethical values to which we adhere, allowing nothing to re-orientate them.

You entrust one of your most precious senses to us, be assured that together we will succeed in restoring it.

We offer you auditory aids combining the most developed technologies in the world and a completely, innovative design.

It is imperative that any intervention for an auditory appliance must be preceded by a consultation with an ENT specialist who will determine the type and degree of your auditory loss and who will be able to assure that there is nothing to prevent you being prescribed to wear an auditory aid.

One of the roles of an Audioprothetist is to bring into the public domain his expertise in terms of information and preventative advice on the problems linked to audition/hearing.

It is in this framework that we offer free hearing testing.   Non-medical, preventative, auditory assessment is by appointment only.

Anatomy of the auditory system

Anatomy of the auditory system 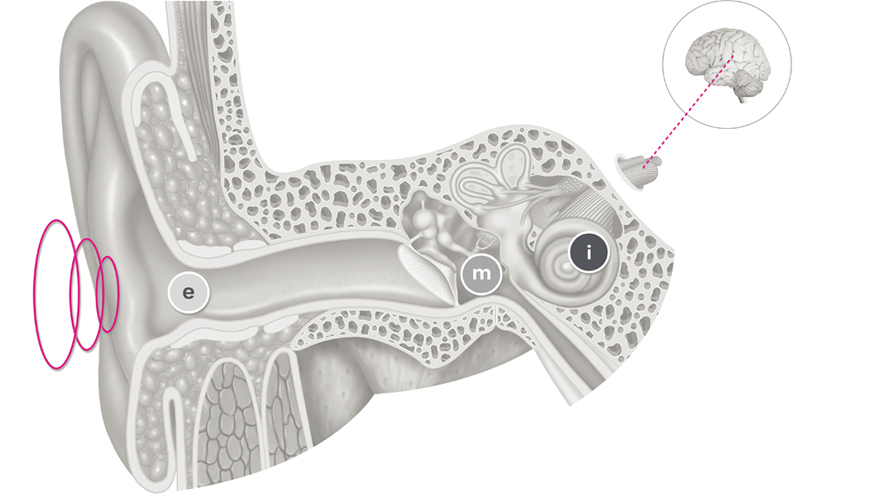 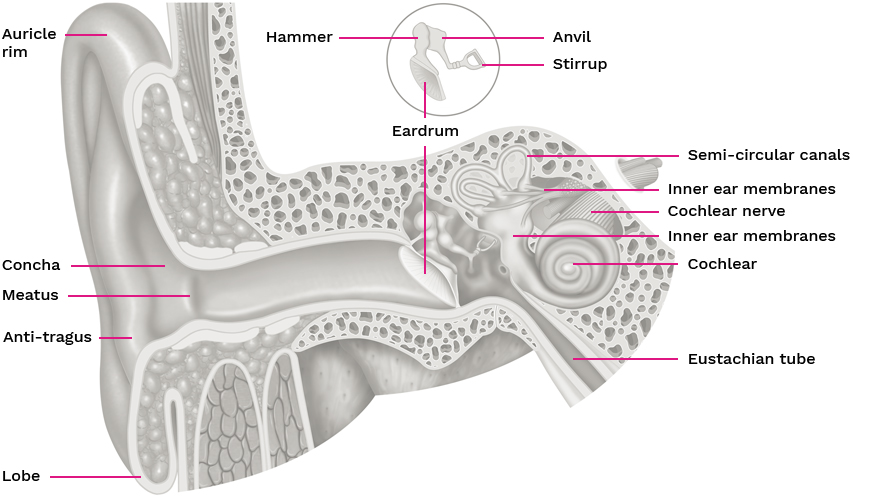 Without which, nothing would be audible.   The hearing brain then undertakes the specific job of decoding and interpreting the neuro-electrical impulses.   It is here the auditory input metamorphoses into something comprehensible for Man.   This is why it is paramount to preserve the quality of the transmission of the information signals either by respecting a safe decibel level when there is no existing lesion, or by using a hearing aid when there is an evident auditory deficiency.

Auditory transmission loss is characterized by damage to the outer or middle ear. Sounds do not reach the inner ear correctly. In cases of temporary disfunction, this type of auditory loss is usually treated medically or with surgery.

The main causes are :

(including damage to the cochlear and the integrality of the auditory system including the cortex) Neuro-sensory, auditory/hearing loss represents the majority of auditory problems and generally originates from the body’s ageing process however sound traumatisms, taking of medicines toxic to the ear, ear infections or congenital factors can also be the cause.   We classify viral infections, prematurity, traumatisms after a difficult birth, congenital malformations or hereditary factors as being amongst the pre-natal causes.   In this case, the auditory/hearing capacity is impacted because the ciliary cells in the cochlear are damaged and don’t transmit the neuro-electrical impulsions correctly to the brain (via the auditory nerve) which is responsible for carrying out the metamorphosis of the original sound signal into perceptible and understandable sounds to Man.

Is characterized by an attack on the nervous pathways.

Furthermore, when both transmission and perceptive types of loss are co-existant, it is referred to as a mixed auditory/hearing loss.

AUDIOMETRIC CLASSIFICATION OF AUDITORY DEFICIENCIES ACCORDING TO THE WORK OF THE BIAP – INTERNATIONAL OFFICE OF AUDIOPHONOLOGY Scientific company created by Belgian Royal Order on March 24th 1967.

Tonal loss is no greater than 20 dB. Otherwise known as a slight tonal attack but with no major consequences.

Average tonal loss situated between 21 and 40 dB. Words perceptible at normal speech level but which are difficult to hear as a whisper or at a distance. The majority of familiar noises are perceptible.

To be audible, a sound frequency must be situated between 16 Hz and 20,000 Hz (for an infant) and more commonly up to 16,000 Hz for an adult patient.   Below 16 Hz are infra-sounds which are imperceptible to the human ear but which can nevertheless induce physiological effects on the body.   Above 16,000 Hz we enter into the domaine of ultra-sounds, which are too high to stimulate an auditory sensation.

Tonal audiometry is a subjective test, which evaluates auditory intensity. It uses pure sounds in order to determine the auditory threshold (the lowest level at which a sound is perceptible for each respective frequency tested) and is conducted in two ways: By aerial conduction with the help of a headset placed over the ears and by bone conduction through the intermediary of a vibrationary device positioned over the mastoid bone 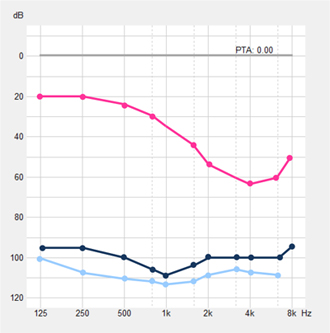 Represented in the graphic above, the corresponding values are :

Tonal audiometry supra-limitation in itself permits the study of the ear’s dynamics as well as the frequential and temporal selectivity thanks to the usage of pure sounds at a higher level then the auditory threshold.   This so-called discomfort is defined as the acoustic level when auditory sensation becomes intolerable.   This measure suggests to us (in the case of hearing aids) the parameters which must be considered in the settings in order to preserve the integrity of the patient’s dynamics.

Vocal audiometry is an indispensable test, which completes tonal audiometry. Indeed, in the areas where tonal audiometry only gives absolute thresholds of sound perception, vocal audiometry informs us about language comprehension (intelligibility) as well as discrimination (ability to discern phonemes/similar sounds).   Vocal audiometry is conducted by repeating to the patient lists of words; generally dissyllabic (Fournier), monosyllabic (Lafont) or Broomsa, designed specifically for children.   The results found dominate the indication and the choice of hearing aid and can help in the diagnosis of some retro-cochlear pathologies like, for example, the schwannome window.

Represented in the graphic above are the corresponding values:

Protecting your audition is important, hearing is essential

There is an appropriate protective solution for every occasion reconciling performance with comfort, whatever the situation calling for a reduction in ambient noise; motor sport, working in a noisy environment, enjoying a concert, going out hunting, getting rid of the undesirable side-effects of ear pressure change during a plane’s take-off and landing, along with wearing earplugs during swimming or to help you to get a good night’s sleep. 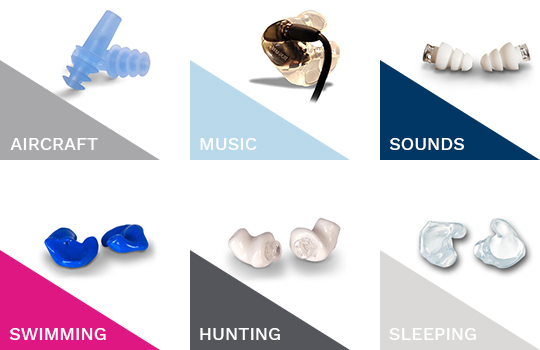 In order to best preserve your hearing capacity, Hearing Institute of Resources offers a range of auditory protection, 100% made to measure or to a specification appropriate for your activities.   There are numerous consequences linked to noise exposure and they can sometimes be irreversible. Here are some of the symptoms frequently observed which are manifested after over-exposure to noise.