Noise Hypersensitivity is defined as an intolerance (rather than a heightened sensitivity to sound) to environmental sound levels which, to a greater or lesser intensity, represent neither risk nor damage to a person with normal hearing but which induce discomfort or pain to noise hyper-sensitive patients.

Noise hyper-sensitivity is not synonymous with improved hearing, auditory intensity is not improved.

Pathological over-sensitive hearing comes from the fact that the ear has lost its functional capacity, which manifests itself as sharp pain in hearing and comfort thresholds: sounds of a comfortable or loud intensity are exacerbated.

By way of an example, a telephone ring along with the throbbing of a car engine can be perceived respectively as the sound of a fire engine’s siren and a jet plane’s engine.

This hyper-sensitive hearing brings on discomfort and fatigue as well as pain and nausea. The amount of pain suffered is proportional to the time exposed to the noise.

In this way, a child simply crying can provoke an extremely strong pain, which can last from several hours to a few days.

Taking into consideration that the perception of certain sounds or being exposed to some sound levels, even for very short periods of time, can bring on pain and fatigue, people who are hyper-sensitive to noise tend to protect themselves from any potential sound aggravation by wearing auditory protection (earplugs) in the majority of everyday situations.

Thus, noise hyper-sensitivity results in an affected patient modifying his or her behaviour by putting in place disproportionate coping mechanisms to face daily situations.

A person who is noise hyper-sensitive will consequently often do anything possible to avoid taking part in a family meal, having a cocktail with colleagues or taking the children to the park.

He or she finds himself constantly confronted with the necessity to protect him or herself from all noise-filled situations, thereby losing social contact and not subjecting him or herself to interacting and conversing with people around as it means risking sooner or later being exposed to a pain-inducing sound for them.

In a patient suffering from noise hyper-sensitivity, behaviour anticipating potentially dangerous scenarios, which could have an impact on their daily life, is often observed. This can drive the person to withdraw progressively into him or herself and to give up, resignedly, on almost all aspects of social life with considerable consequences on their professional, marital and family status, which profoundly and lastingly affect their life.

Noise hyper-sensitivity to noise is not systematically concomitant to a loss of hearing or to a problem in the auditory system even if statistically it is seen in 40%* of the people who have tinnitus (* source France Acouphenes) and affects about 2% of the overall population.

A successive decline in discomfort following auditory fatigue which has lead the patient to opt to wear ear defenders in an inappropriate way leading to the occurrence of noise hyper-sensitivity.

It can be caused by an accident (head trauma…), ototoxic drugs, psychological problems or even neurological confusion. 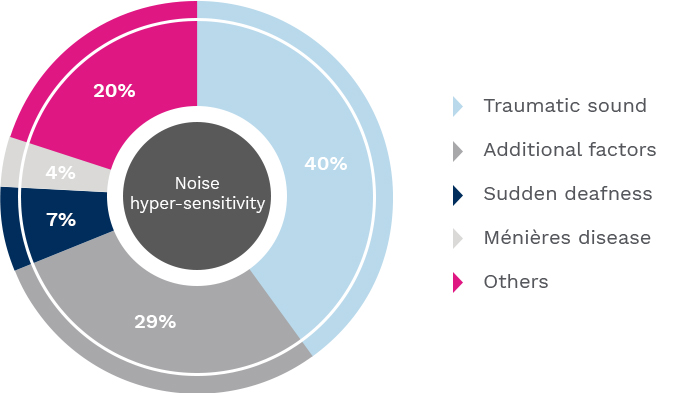 It is indispensable to make the patient suffering from noise hyper-sensitivity aware that he should in no way over-protect himself in his everyday life which would lead to an accentuation of his hyper-sensitivity. Sounds perceived as disagreeable or painful come from a false impression of his auditory system and is in no way traumatic to his ear.

Onset of a noise hyper-sensitivity symptom

Onset of a noise hyper-sensitivity symptom

The onset of a noise hyper-sensitivity symptom, along with that of tinnitus, requires urgent medical attention and it is imperative to consult an ENT consultant within 48 hours.

Furthermore, there are so-called habituation or de-sensitization therapies called TRT “Tinnitus Retraining Therapy” which are designed to allow the patient to better anticipate and control his noise hyper-sensitivity in order to resume a comfortable life.

It is also not recommended to use a white noise generator allowing the ear to be artificially distracted so as to divert the auditory system from surrounding noise.